Come with me on a journey through the eye of beauty across an ocean of grief … and beyond.

Filmmaker Jan Vozenilek of Copper Sky Productions shared one of the most moving stories of human-caused assault on the natural world at the Building Sustainable Communities Conference (BSC) in Kelowna. I have just returned from there and am still assimilating BSC’s ultra-intensive agenda connecting sustainability perspectives, people and planet.

Jan is part of a crew making a film on the plight of the albatross that nests on Midway Island in the middle of the Pacific, 2000 miles from other land. The birds are horrifying ambassadors to the human species of the bio-cide our manufacture of plastics and how our careless disposal of everything from bottle caps, to cigarette lighters, to plastic straws imperils other species. The Midway Film shows the life-decimating graveyard of these plastics is not the apocryphal plastic island swirling in the gyre of the Pacific but the guts of the baby sea birds who ingest the plastic as food – inedible food that fills their guts and guts their life.

Jan shared the advice of the Hawaiin elder who warned him not to feel sorry for the albatross – but instead to take their story as a gift to us – a message to change our ways. Jan told us that the plastic killing the sea birds is sourced from the casual disposal of plastic along the river banks of the world. He demonstrated this uncomfortable truth by collecting a box of plastic junk from the city of Kelowna, along the shores of Lake Okanagan – (where our conference hotel was located – 1000 km from the ocean). Like the canaries in the coal mine who save miners from poison gas, or the bees dying of colony collapse disorder, the albatross has a message for the human species.

Jan is a modern day Goya (who with his painting of the Disasters of War documented the brutality of war and the atrocities that mankind inflicts upon itself).  Jan is holding up the horrifying beauty of the dying colony of albatrosses (whose plastic-filled skeletons are unnervingly beautiful sand paintings with their feathered bright and pastel shades of plastic entrails). The man-made guts are literally gut-wrenching – an atrocity we can take as an object lesson of the (unintended?) consequences of our irresponsible polluting behaviour. The film enjoins us to steward nature and respect other species, by first taking responsibility for our actions. Clean up our mess wherever we are so we don’t spoil nature for others – who might be half a world away. You can support Jan and colleagues work by contacting him at Copper Sky Studios. 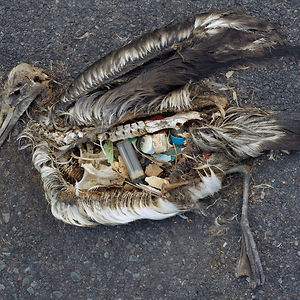