The Summit on City Psychology and Place convened by Liverpool University, London Campus and hosted by Charles Landry and Chris Murray attracted an overflow crowd of largely psychologists and psychiatrists. 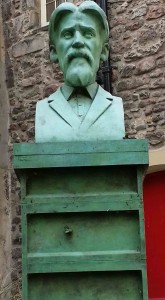 The themes were large and explored in 2 sections. The morning was opened by Landry’s evocation of Patrick Geddes – that a city is a drama in time. It holds Zones of Encounter and Places of Empathy. A city communicates in every fibre of its being. As a result, it is foolish not to consider the psychology or the emotional intelligence of the city. Landry explored Space, Place and Time (and I was left wondering what role Moral Influence played – the 4th factor I consider when catalyzing leadership?). Landry asked, “In the city where is the Fixed in relationship to the Fluid and the Flexible (and I answered silently, “in the middle of the Meshwork”).

He noted that the village arose from groups of 150 to 250 people – possibly the evolution of a number that many brain experts note is the optimum volume of relationships a person can easily manage.

But in the era of villages, time was linear – it followed cycles and seasons. Thus, we are rediscovering in Developmental Psychology, in this information era, time is non-linear and we have need for quiet reflection space – especially in the midst of the Smart City Technology Model. We need to reawaken the Emotional Intelligence of cities.

Murray invoked the wisdom of James Hillman, that we need to “Improve yourself, [to] Improve the city”. 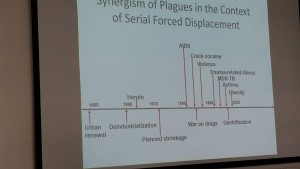 We heard next from Prof. Mindy Thompson Fullilove – who takes a bio-psycho-social approach to explore the synergism of place. She explored the experience of African Americans and how the city systems had victimized them through urban renewal policies (during McCarthyism) that wiped out the Left in cities – thus destroying the crux of relatedness that is the great goal of the city (harkening to Jane Jacobs). Fullilove pointed to the city of St. Louis where Google Earth can reveal from space the great divide of gentrification and poverty that separates the city.

On a more positive note, we heard from Jon Rouse about Manchester’s great success in using population health to make policy decisions that are informing the city’s health and social care partnership. Rouse talked of social determinants of health, organic leadership and agile – even messy – bottom-up approaches to improving physical and mental health levels.

On a more casual approach we heard from Aracelli Camago (Centric Lab) about her research into the senses and their influence on the stress response. She appealed to the senses of the city and asked:

Ron Martin of Cambridge addressed Personality and the Economy. He noted that Where you are feeds into your prospects and the success of your economy. He reminded us that Ed Glaser had recommended that “place-based policies must add people-based policies”.

Prof. Rhianna Corcoran of Liverpool U reiterated that we can now track epigenetics in cities. The quality of place has a real evolutionary impact. We must overcome our “place-blindedness” and recognize that qualitative analysis can expand and affirm the quantitative research on risks and threats, niceness and trust. (And moreover, there does not appear to be evidence of outcomes from top-down efforts to change our places/cities.)

After lunching, our discussion switched to Vital Spaces and Calm Space and we started to look for the ramps for (improving) mental health.

We considered sonic models for creating calming spaces; the role of creative design and expression.

Finally, we heard from Sue Jarvis of Liverpool U, with a perspective of Social Psychology – and its contribution to health and wellbeing in the city.

This Summit on City, Psychology and Place was a full day that asked many questions and opened many doors for further exploration. WE were reminded that our need for therapeutic communities had to be matched with our need for communities that were therapeutic.

Integral City was left with some questions of its own: