Integral City Map 2 is a Telescope of Climate Stories

How do the 5 Maps used by Integral City make visible the wholeness of the human hive, when we consider Climate Change?

Each of the maps gives us different perspectives to view the patterns of wholeness – through stories. (Moreover, the Integral City maps reveal the consciousness and culture changes that Doughnut Economics depends on to realize AQAL development that brings human systems back into balance with all living systems.) 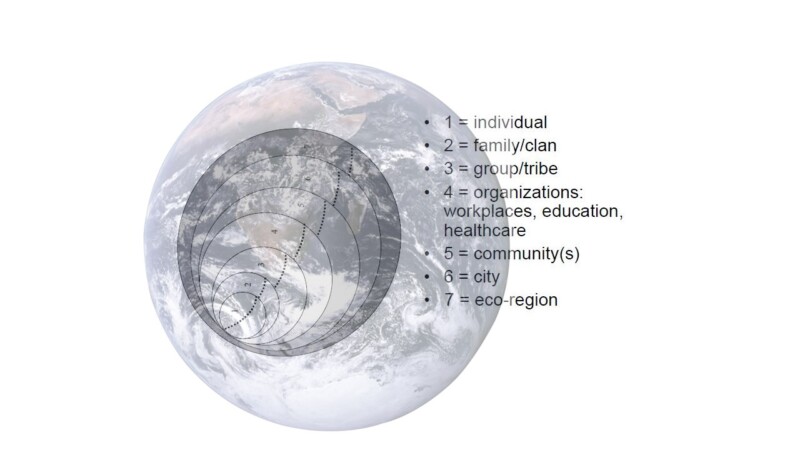 When we discovered Integral City Map 2, it seemed to be a cluster of maps nested into each other in a telescopic pattern where we can see the largest scales holding all the smaller scales.

We can see the largest scale is the planet itself – and as we peer into its depths, we can see the weather systems swirling around the earth.

As we look closer we can see the marks of mighty ecoregions – like the Sahara desert stretching across Africa, the Andes marching down the west coast of South America, the rich lands of Cascadia along the Pacific shore of North America, the continent of Australia, and the mighty tundra of Siberia. Each ecoregion resonates a different story of how the cities in their area impact their wellbeing and flow of resources (in the circular and non-circular economies that Doughnut Economics tracks) as climate changes and they change the climate.

When we peer into one of the cities, we can see a whole ecology designed just for people. We notice how human evolution has produced the infrastructures, cultures, behaviours and emotions that we glimpsed through the mirrors of Map 1. But we also see in the cities the evolution of community parks, work places, neighbourhoods, families and individuals.

Through the telescopic view of Map 2 we can see in action, the climate as an interactive, interconnective, living phenomenon of life on earth. It is the map where we can see the impact of climate from the smallest part of our human selves to the largest impact of our human endeavours.

We can appreciate that climate has been and remains a major trigger in human life and history. And now that we can gain the overview from our telescope – it is clear that the number of humans alive on the earth now triggers climate change. This Map 2 reminds us of the gift of life and our responsibility to the living planet which has evolved us.

This series of five blogs explores how Integral City Maps help us understand Climate Change through the stories of evolutionary human systems embedded in the maps. They include:

Integral City Map 1 is a Set of Climate Change Mirrors

Integral City Map 2 is a Telescope of Climate Stories