Futures Lab Russia, July 2021, invited Integral City to imagine cities in 100 years. This series of blogs comprises the lecture that was offered by Marilyn Hamilton PhD, Founder of Integral Cities. 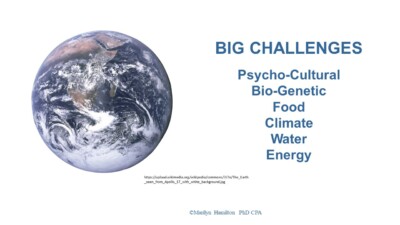 With such oppressive scenarios to contemplate, I am going to call up my radical optimism to have a conversation about cities with Gaia herself. I have asked her “how do you imagine your cities in 100 years, after we have finally recognized our life is inextricably part of you as our Mother Planet?

I imagine Gaia as a Thriving Planet.

I imagine Gaia as thriving and flourishing in a new golden age [100+ years from now]. I am a living example in the universe of planets, of a thriving mature living system where human contribution reflects how magnificently Creation has evolved all life here including humans themselves.

I imagine I have awareness of all my evolutionary life and we have complete awareness of ourselves on a spiritual Cosmo-Bio-Anthropo-centric basis.

I imagine the role Integral City (IC) plays opens up because humans became able to be effective both locally and globally. Imagine the younger generation(s) break through the initial (pre-2021) fascination (for Gen Y, Z) to contact each other and they, realize they have local + global (glocal) power and can see that power is Collective Intelligence (CI). Imagine them as Gen-CI.  CI enables cities to discover double sustainability loops (like the bees have discovered where they sustain the hive and pollinate the eco-region). They implement the Master Code to Care for Self, Others, Places and Planet.  With this expansion of their circles of care to planetary scale, it is natural for them to implement the visions of Vandana Shiva to reconnect with the soil and rejoin the city to its eco-region. In overcoming your current “Nature Deficit Disorder”  this CI generation amplifies the intelligences to make it happen.

With this special development of Collective Intelligence, the CI’s truly embrace the Integral City GPS and find direction in, with and as the Integral City. They are adept at assessing the Contexting Intelligences (ecological, emergent, integral, living). They balance the Individual (inner and outer) Intelligences with their new prowess of Collective Intelligence (culture and social) so that the relationship between I and We is elegantly regenerative. And they design effective Earth-centric strategies because they never tire of Inquiry; they have learned how to Meshwork self-organizing operating systems with structural operating systems. Altogether they are proficient Navigators of Aliveness – using guidance from the zero-point Akashic field along with advanced digital and beautiful analog guidance systems. Finally, the CI’s attune many times a day to the Evolutionary Impulse they know as their Source.

I imagine humans and human hives connect themselves in eco-regions around and in cities, bringing the relationship of Integral Cities and eco-regions with Gaia to life. This brings the value of Integral Capacities – which you mapped out in Map 1 of the whole AQAL city – to life through a series of generational cycles. In addition, we can see how the governance from the 4+1 Voices of the City matured from mutual trust and respect to a governance system that guides cities through coalescing authority, power and influence within cities and their eco-regions and across a Planet of Integral Cities.

I imagine this creates new conditions on Earth, so people develop in new ways. In 2021, we know the steps, stages and lines of 1st tier human development, but as 2nd Tier blossoms, I imagine we learn to recalibrate and accelerate whole lineages, worldviews, cultures and societies so they can become mutually sustainable – by breaking political and economic stereotypes, like Kate Raworth imagines with Donut Economics and Duane Elgin imagines in “Choosing Earth” and you have shown on Map 4.

I imagine modern and post-modern worldview stereotypes embedded in the developed world are counteracted by emerging city-states who break open those stereotypes and find natural self-organizing capacities of economy, environment, society and culture. Imagine the children of Gen-CI discover new answers and their grandchildren and greatgrandchildren enable thriving cities on a thriving planet. I knew that in 2021 the roots for those new possibilities exist in our DNA and the DNA of Gen-CI.

The Spirit of the Integral City sparks to a new level of aliveness, with the spirit of younger generations (Gen-CI) who grok and know it as achievable reality. I knew they had the courage to not just dance with positives but even walk into the middle of shadow and turn it inside out (like the Shambhala warriors they are). I imagined Gen-CI could light up shadow in ways you think is blocked now. I imagined Gen-CI and their whole lineage into the future, could release, shadow-blocked energy into new capacities that became available because the energy blocks dissolved.

As Gaia, I imagine I have Reflective Organs (GRO) – that is why I evolved the human species as my RO. I could see that especially cities could become my Reflective Organs. I imagined GRO (especially with Gen CI) could face the trauma and blockages in my planetary body. I wanted the human species as GRO to work as reflective beings who can find and release that which is blocked and regenerate flow.

I imagine, Reflection is the essence of the human species. I evolved you so you are conscious of your consciousness and able to think, do, relate and co-create in ecosystems, able to follow matter, information, energy – in their flexes and flows. Reflection follows feedback loops, so that as the systems become open, the organ is able to function more fully. You thought darkly in 2021 and were limited to ego and family and work scale. Many in Gen CI saw what an impact it made to practice the Karma Yoga of the Master Code of Care (see Russian Image) – Caring for Self, Caring for Others, Caring for Places, Caring for Planet.

As this practice opened whole systems to flex and flow, I imagined Gen CI enabling blinders to be taken off, the veils of separation and fragmentation falling away, so we could all see Integral Cities as vibrant, alive systems. I imagined Collective Intelligence in IC could holographically sense all of Gaia and at the same time light up all cities, as a Planet of Integral Cities system.

I evolved the Integral City framework of 5 Maps of the city as organic – it is a life system, to design and build not just cities, but even space stations. I imagine we save ourselves from the threats we create as we co-evolve together. I imagine we really wake up, grow up, clean up and whole up together.

I imagine, by the time I Gaia am thriving, we will have carried our capacities off Earth and discovered as we learn how, what happens on Gaia can happen off Gaia. I imagine that we are in a dance of inner and outer, individual and collective; I become a really thriving planet as humans become a really intelligent species with deep respect for cosmo-bio-anthro-centric life that brought us to this point, cities and all.

This blog series considers the factors that will contribute to the evolution of Gaia’s Human Hives in the next hundred years.